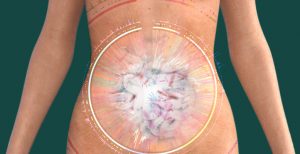 So how does SIBO affect you? SIBO causes damage to the surface of the small intestine, which inhibits the ability of the body to absorb nutrients from food, leading to malabsorption of vitamins and minerals. Fermentation by bacteria causes hydrogen, methane and hydrogen sulphate gasses which damage the intestinal wall and cause uncomfortable symptoms. When the gut is damaged, larger particles of food are able to pass through which can cause an immune response such as skin rashes or acne.

How did you get SIBO in the first place?
– Stomach infections from either a virus, bacteria, bacterial toxins or parasites
– Particular chemicals or drugs
– Over consumption of simple carbohydrate
– Medications
– Stress
– Surgical interventions that cause scarring and adhesions which alters the anatomy of the small intestines
– Colonisation of bad bacteria after a caesarean birth or not breastfeeding

Here at Core, we work with the Bi-Phasic diet, which follows a phased approach to diet and treatment. This phased approach limits the side effects of bacterial “die off”. This approach also aims to prioritise the repair of disturbed digestion, which means you’ll feel better sooner!

The first phase of the diet focuses on reducing fermentable starches and fibres, which is necessary to starve bacteria of their preferred fuel. Repairing damage to the integrity of the intestinal lining, as well as repairing proper digestion is imperative in this phase.

The goal after completely the protocol is to expand your diet as much as possible – it’s never advised to stay on a restrictive type diet for more than necessary as this leads to more sensitivities and reactivity down the track.

Are you someone who thinks you may have SIBO? Please don’t hesitate to get in contact with our practitioners so they can point you in the right direction towards better health.